The Good, the Bad, the Ugly: Net Neutrality 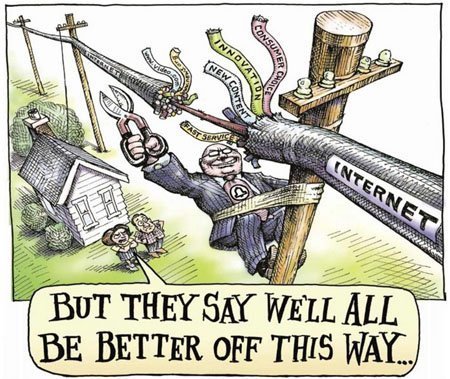 Net neutrality refers to keeping the internet, and all the associated services and protocols, open and free for everyone. According to the American Civil Liberties Union, ???????If the government doesn????????t act soon, this open internet ???????? and the ???????network neutrality??????? principles that sustain it ???????? could be a thing of the past.??????? Imagine, for example, that every time you went online you had to pay extra or a premium price to Comcast in order stream videos from Netflix? Imagine if you weren’t allowed to use Skype on AT&T networks because they were owned by their competitors? Well it might be a reality without a ruling on net neutrality. Further, the consumer is sacrificing their privacy because providers would use this information specifically for throttling.

According to Save the Internet, ???????Thanks to the huge public and political outcry, Wheeler shelved his original proposal, and on Feb. 4th 2015 he announced that he would base new Net Neutrality rules on Title II of the Communications Act, giving internet users the strongest protections possible. ???????

Many people, however, disagree with net neutrality rulings saying that it would stifle natural competitions and markets in the industry. Consumer????????s need to have a variety of plans available to choose from. According to Jeffrey Dorfman of Forbes, ???????More choices are good for consumers. We win from having multiple flavors of ice cream in the store. We benefit from the large variety of cars available for purchase. The fact that most people cannot afford some of those models does not mean they should be removed from sale. Similarly, the fact that some businesses or consumers may choose to pay for better access to the Internet is not a bad thing. Some people pay more to fly first class, but they do not interfere with my travel in coach.???????

the ugly truth as I see it… well i think this is another way for the government to peer into your activities as a consumer and to not only monitor what you are doing online but to tax it as well. Being in Illinois, I have a stigma about government intervention as our state and local governments are the most corrupt in the nation. Look at the Illinois toll roads for example. These were only meant to be temporary as a means to fund the development of a solid highway yet we still have tolls, they are steadily raising, and the state has even spent money on a new RFID tolling system to make payment collection easier and faster instead of just removing the tolls altogether as was promised. Excuse me if this sounds cynical but I firmly believe we will never see our highways without tolls just like the net neutrality act will end up costing us money and privacy like anything our government does. Now, I realize I am jaded in this matter so please let me know what you think? Leave us a comment!

FCC just released the new Open Internet Order, check it out for yourself!