Microsoft, after appointing new CEO Satya Nadella on February 4th 2014, has shifted its development efforts and business models towards three platforms. According to Nadella at an event on Redmond Campus, ???????There is Windows, there is Office 365, and there is Azure. That????????s it.??????? For those who may not know, azure is Microsoft????????s cloud computing platform and infrastructure for building, deploying, and managing applications and services through a global network of Microsoft-managed datacenters. With Microsoft????????s new focus on, ???????cloud-first, mobile-first???????, what is the impact on business?

According to Lynn Wu of the University of Pennsylvania in a paper titled Social Network Effects on Productivity and Job Security: Evidence from the Adoption of a Social Networking Tool there is a stunning correlation between the use of information-rich networking (through social media) and work performance and job security. The study suggests that productivity, measured through billable revenue, is increased when employees discuss topics that aren????????t directly related to business. This breaks the traditional notion that social networking leads to personnel inefficiencies. Furthermore, the author goes on to state the reasoning behind this mechanism, ???????By linking unconnected groups, the brokers, who bridge these structural holes, are endowed with early exposure to novel information and can act as hubs to facilitate information flow between otherwise disconnected groups.??????? 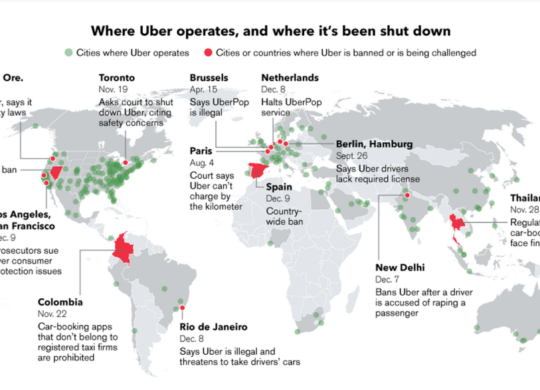 Amidst the growing number of concerns about extemporaneous business practices, Uber????????s actions have stirred retaliation from local and federal governments around the world. Currently Uber services have been banned or suspended in Nevada, Delhi India, Thailand, Colombia, Rio de Janeiro, Brussels, Berlin & Hamburg, and the Netherlands. They have also been sued by the city of Portland, Oregon to stop operating within city limits. They have been sued in Los Angeles and San Francisco over consumer protection issues.  Toronto asks courts to shut down Uber services due to safety concerns and According to an article titled Prosecutors in San Francisco and Los Angeles Sue Uber, Settle With Lyft by Katy Steinmetz of Time Magazine, ???????New Dehli and Portland are moving to block service like Uber from operating, due to concerns about oversight and safety???????. Below you can see a Bloomberg infographic from Alex Tribou which illustrates where Uber operates and where it????????s been shut down.

With the New Year around the corner you can expect lots of new, shiny, and innovative technology in your future. From wearable goodies to bendable screens this upcoming year could prove exciting! While this is definitely not everything, these are the technologies that stood out. Samsung announced plans for a smartphone with a bendable display. According Lee Chang-hoon at the Samsung Investor Forum 2014 held in New York, Samsung ???????will secure production capacity of 30,000 to 40,000 by the end of next year. We plan to provide consumers with a product that has a flexible display by the end of the year.??????? Which will prove to be a huge competitive edge for Samsung in this upcoming year.

Curious about who we are and what we do? Check out this short slide show!!

Why hire and manage virtual employees in your organization?

To effectively manage employee????????s in a virtual environment it becomes critical to understand traditional management as well as barriers to communication in order to overcome these hurdles. Managers can expect difficulties when working with virtual employees due to time zone differences, cultural differences, and technical difficulties. These may seem cumbersome when one is not familiar with managing these systems, but the benefits derived far outweigh the complications. These benefits include reduced real estate expenses, increased productivity, access to global markets, lessened environmental impacts, increased employee engagement, better knowledge transfers, and corporate flexibility in terms of team assembly. While many people understand why it makes sense to hire and manage virtual employees, many business owners don’t fully understand how to manage virtual employees.

As a company seeking market share, competing against slews of competitors, how does one produce a website that is effective in garnering profits? Effectiveness of a website for a company is relative to market segmentation and can be judged by its ability to bring in potential clients from their target market segments. While we could delve into the minutia encountered by each individual industry and their associated target markets, it makes more sense to discuss what features lead to website effectiveness overall on a general scale.

Recently I was approached by my old college professor to put together some documentation to assist with her e-commerce class on dealing with supply chains. She relayed to me that her students we not fully understanding what a value chain or supply chain was and how it was applicable to their future job. The format was to be an interview between the professor and myself so she sent me the questions and asked that I stage and rehearse my answers. Below is the outline I used for her class as I feel many can benefit from the information within.